People tend to relate anime to cartoons, and at the first glare, maybe you can say they’re somewhat similar. But when digging further you find anime has way more compelling stories; full of moral reflection and ideals that may offer you a different p from yours. And even in these differences, you can find there are things to relate to.  Anime shows and movies are in many cases great stories going in hand with great visuals to provide the maximum amount of entertainment. While movies may do the same, anime has a shorter/simpler method of doing these things than movies. There are in fact, many anime shows that are better than many Marvel movies or shows [especially the most recent, Phase 4].

The same can be said about manga; these Japanese comics are quite aesthetically pleasing. With manga, you can get the satisfaction of reading and seeing details that are much more fleshed than a regular book. Also, manga’s excellence is the artwork. Many mangas like Berserk, Bleach, Attack on Titan, One Piece, and many more have great visuals. As well as they also have amazing stories that can make you relate more than a regular book would. This scene takes place in Naruto, Pain uses “Shinra Tensei” or “Almighty Push” to destroy Hidden Leaf Village.

The feeling of fear, anxiety, and overall negativity surrounding the village are all amazingly wiped away once the next scene happens. The arrival of a ray of hope, Naruto. Someone who represents good within all the bad. After learning new skills, Naruto shows up in a destroyed village to protect those who once saw him as an outcast. The village that once treated him like a beast thanks to mistakes of the past. He came to the rescue that he considers dear to him. These two scenes in contrast show you how much a simple panel or moment of a manga can influence the story at hand.

In these scenes, you can see the attention to detail that the author has paid to [the destruction caused by Pain’s ability.]. You can see the amount of damage and you can understand what is going on. Everything about this scene expresses emotion, the speech before where he said “the world shall know pain” and the destruction of the place where we see our hero grow up and become the man he is till this point. We see the civilians and even the strongest fighters of the village in awe at how much power this enemy holds. Because they had never dealt with someone with such divine power, they could only pray for someone or something to help them get through this tough time. 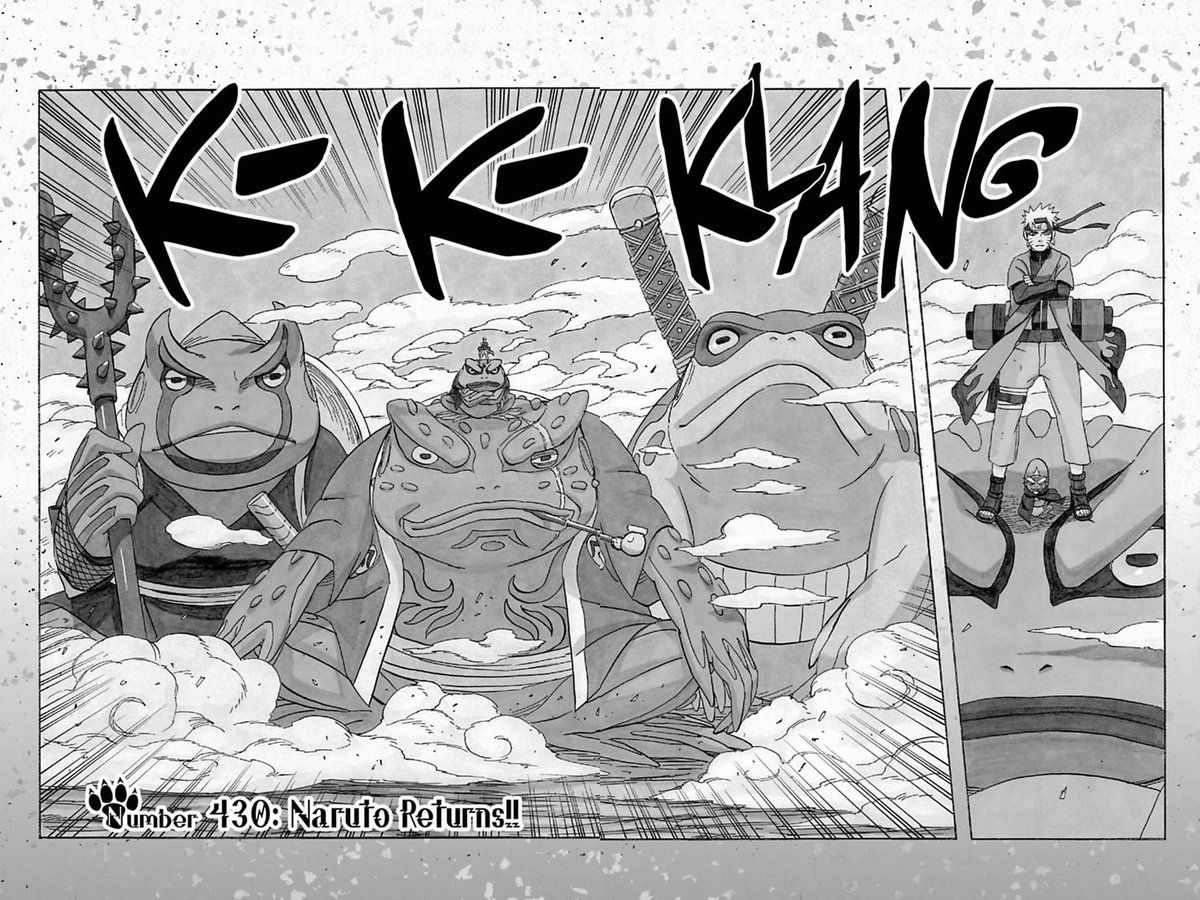 Another example of this comes from Jujutsu Kaisen by Gege Akutami. This is one of the best new generation manga, this example takes place in a flashback where we see Gojo- the strongest sorcerer, during his days as a student at Jujutsu High. In this scene he’s fighting what would be considered his antithesis. After facing and coming back from the brink of death, Gojo says:

In this, Gojo is quoting Buddha Sakyamuni. It’s said that after Buddha Sakayuni was born, he took 7 steps from his mother and said that while pointing to both heaven and earth. It may be simple on display, but once you understand Gojo to be considered one of the “two enlightened beings’ to ever exist in the Jujutsu Kaisen world, you understand that this quote is representing how he’s being “reborn” as an enlightened being after using extremely complicated abilities to come back from death. Even on his face, you can see the calmness yet arrogance of growing stronger. This scene explains how his power has grown exponentially just with simple expressions and words. Needless to say that the art itself is amazing, showing simplicity yet detailing. From his expression down to the clouds, it all looks to fit together and “feel right” within the scene. 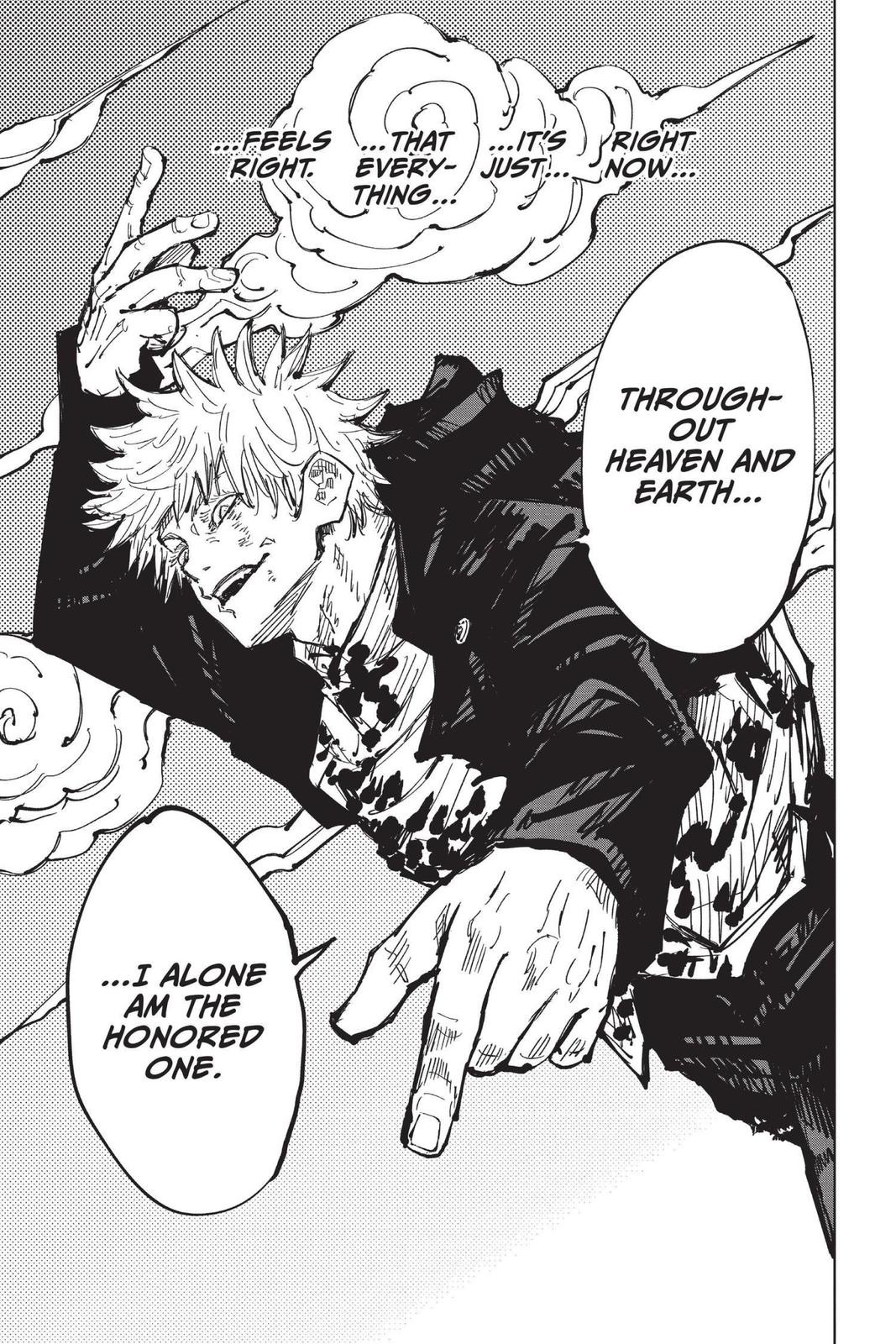 All these scenes show how great manga can be. From cultural inspirations to relating feelings to the reader itself. Those plus a lot more things can be experienced through simple page-spreads and detailing, without the need for words to convey what’s happening, examples of “show don’t tell.”

In stories like Berserk or Attack on Titan, that use large amounts of gore or explicit scenes to pull the reader in, you can still appreciate the art style and details being displayed as you know the mangaka (graphic artist and writer who creates Japanese-style comics) spend weeks and even months trying to capture that one perfect scene! Many of the greatest panels and scenes of these series are created through these characters’ development. Like most stories the payoff is seeing how much growth they have gone through. We see their growth through the trials and tribulations, watching Eren Jaeger or Guts go from young lads to grown men. Being put in situations where they have to choose between themselves or their cause or the ones they love is compelling.

As said in the article “The Brutal Beauty of Berserk” by Henry Garland, “The artwork of Berserk itself is filled with a dizzying amount of detail that shows the beauty hidden within the filth of Miura’s cruel world.” The story of berserk is told through beautifully executed horror and gore. The story of Guts, a man that goes down a path of revenge and anger thanks to betrayal and the loss of his companions while also trying to protect those who are close to him is depicted in such a beautiful way that it makes us relate to a character that seems to be a horrible human being.

In contrast, Attack on Titan is a story based on “freedom” and how much power this holds in “moving forward.” AoT is the story of Eren Jaeger, a kid who lives within gigantic stone walls created in order to protect humanity from man-eating titans. Eren and his friends wish to one day be able to venture outside of the walls and see the ocean. One day, all of his life comes crashing down thanks to a colossal titan breaking the walls. After this, Eren makes a vow to kill every single titan. With this in my mind, he joins the military branch that engages directly with Titan activity, the Survey Corps. The story integrates realism, with aspects like militarism and oppression, to a fantasy world like the walls and the titans. Like it’s said in the article “Attack on Titan: Horror and the aesthetics of fascism” by Ruben Ferdinand, “It can’t be denied that in Titan, there is an aesthetic and narrative emphasis on the glory of military, the necessity of sacrifice for the greater good, and terror and death at the hands (and teeth) of an enemy horde.” The premise of sacrifice, military power, and more importantly freedom are greatly expanded upon in this compelling story. It may not be the first usage of these ideals but it is a unique and interesting way of doing so.

People tend to think anime is for kids because it closely resembles  “cartoons.” But that couldn’t be further from the truth. Cartoons are childish and short-sighted, the stories are for a child to understand and enjoy. Anime is a lot more complex than any of that. Anime holds very close sentimental value, anime is able to tell stories better than any cartoon you can think of.  Although both are animated, the style of animation is clearly different as anime has a more detailed style compared to regular western cartoons. Anime’s storytelling requires people to be able to understand what is happening on more than just surface level. Reading and watching anime have a lot more subtle details that can tell a story without people realizing. For example how Eren Jaeger’s future is explained within subtle things that as the conflict progresses are explained with deeper detailing. The fact that the story is thought out and mature from the beginning is not something that happens in cartoons, therefore it can’t be for kids.

Some people tend to say anime is for a specific type of person and that is wrong because anime it’s not dedicated to a “specific” group of people. Anime genres are too vast for everyone to like. It doesn’t matter what you look like, feel like or think like, there’s an anime out there to fit what your preferences are. There’s comedies like Food Wars, Gintama, and The Devil is a Part-Timer. There’s action-packed anime like Jujutsu Kaisen, Baki, and Megalobox. There’s anime big on stories like Yasuke, Dragon Ball Z, and “Steins” Gate. So based on these examples you can tell that anime varies in genre and form.  Although anime is similar, it is up to the creator to how the anime is handled. Everything about anime is bound to connect with any type of person. Pace, Art Style, Animation, and several other aspects of anime are bound to tie you into one that fits you as a person.

Even after all of this, some people may find a way to say anime and manga are for kids and that they’re not as good as movies or books because everyone’s bound to stick to their opinion even after being proven wrong. But, this doesn’t take away from the reality of anime becoming a mainstream media of entertainment and storytelling, inspiring many people such as myself to create their own stories and give it a go in a world of fantasy. If you’ve never seen or read anime and manga, give it a try. It’s not good to judge something because others find it bad. Is not always good to follow a “pack mentality.” If you’re not into anime or manga yet but you’re curious, give it another try. Find something that fits what you like, not always what is recommended to you is good for you. And, if you completely hate anime and manga and won’t change your mind, then you’re missing out on some amazing stories that will have you on the edge of your seat. But the point is, that anime has become a form of entertainment and storytelling that can top those such as movies and books.