Where running, computer science, and humanity collide: A profile on Stephanie Redfern 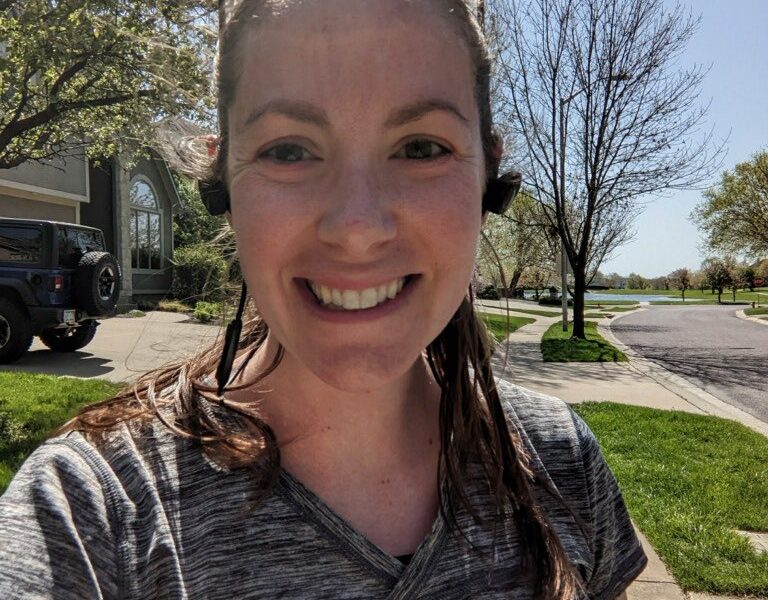 I worriedly check the address that Stephanie Redfern gave me as I take the stairs two at a time up to her front door, with my sneakers making dull thuds on the steep stone steps typical to a Boston residence. As soon as I confirm I’m in the right place (20 minutes late of course), I hesitantly poke the doorbell that I assume corresponds to her unit. I nervously tap my feet, faster and faster as time stretches.

After what seemed like years, but was probably no more than twenty seconds, Redfern’s husband opens the door, greeting me with a pleasant smile. I step in at his invitation, and after I have slipped off my shoes and made my way into the Redfern’s living room, I’m greeted by Redfern. Her young daughter is tucked around her leg and looks at me as if I’m a hideous dragon poised to eat her (which I can assure you I am not).

Short pleasantries are exchanged, and with me being unable to win over the young girl, Redfern and I head down to her office. We descend a short spiral staircase, which shakes enough to make me doubt whether or not I really am a dragon. Without much ceremony, a heavy blue curtain is whisked to the side, revealing a small, airy office.
We both settle down in chairs, and after I relay the obligatory set of disclaimers to my interviewee, a few awkward seconds pass. I take a deep breath then hit record, officially starting the interview.

Stephanie Redfern, born July 23, 1988, has lived in Boston for nine years. She works as a User Experience, or “UX,” Designer for the Asics-owned running app, Runkeeper. She is also the mother of two, and an avid fan of franchises such as Star Wars and Lord of the Rings. Having graduated from Whitworth University in 2010 with a bachelor’s in Computer Science, Redfern has worked in a variety of web and app development and design jobs.
For those who don’t know, UX Design is all about optimizing a user’s interaction and experience with an interface with the goal of making a website or app easy to use and understand. When I asked Redfern what drew her to this specific field, she said, “When I was looking for a new job, I didn’t want to continue in software development, but I started learning about UX […] and realized it was the first time I read a job description [and] it was checking all the boxes of what I wanted to do.” She had always been drawn to graphic design but also disliked the backend work that developing software required, making her perfect for overseeing user experience.

Redfern is a runner herself, which is very helpful given that she works on an app designed to help people be active and get running. “I used to have really bad […] high-functioning anxiety, where you’re dying on the inside but no one can tell because you hide it. […] Running just turned into the outlet for that, to the point where I started to get stressed out, or freaking out about something, [my husband] would just nicely [be like] ‘should I grab your running shoes?’ […] I learned to manage my anxiety that way. I feel like a better person.”

Just as Redfern has been able to use running as an outlet for her anxiety, her work has helped make an impact on people’s lives through running. From a woman who finished her 1000th activity on the app to a man who runs marathons in honor of his daughter who can’t walk, the stories of how running has changed peoples lives are just as beautiful as they are varied. She described how running apps such as Runkeeper can give people the confidence and ability to move from being a shuffle-jogger to running whole marathons. Redfern expressed that she “found such a great outlet for fitness and mental health in running, and being able to share that is amazing.”

Despite these fantastic stories of success, I came to the table with my own misgivings about how technology can impact not just fitness, but all aspects of life. When I brought this up to Redfern, she responded by saying, “A lot of people are really dependent, or even obsessed, with the virtual stats. It’s a joke in the running community that […] if it’s not on Strava, if it’s not on Runkeeper it doesn’t count. Just this feeling that if it didn’t get logged it didn’t really happen. […] I want people to be addicted to running and not Runkeeper.”

However, Redfern still expressed that this kind of obsession is relatively rare, and that technology does more to motivate people in fitness than not. She also gave credit to the safety that devices like phones and smartwatches can provide, as well as what one can learn if you use that time when you’re running to listen to audiobooks and podcasts. And while she admitted that there were destructive, addictive apps out there, she didn’t think that Runkeeper is one of them.

One of the things that I noticed throughout our entire conversation was that Redfern would keep coming back to what it means to be a runner. She repeatedly said things like, “If you run, you’re a runner” or “a pure runner is someone who runs” or even “you can walk and be a runner too.” In the end, everything would circle back to this central idea of what running is to the human race. “Running is so universal,” she said, with a wistful smile playing at the edges of her lips “I don’t think there’s anything more beautiful than being at the Boston Marathon finish line. There are people about to collapse and people come up behind them and pick them up and carry them. People helping each other across the finish line, hugging and crying as they cross. It doesn’t matter if you’re watching or running, it’s just such an accomplishment.”

As someone who has doubted my ability as an athlete, this was truly inspiring to hear. Our society is so selective when it comes to deciding who is an athlete and who isn’t, something that Redfern strives to break down. “We’re a bit of an ableist app. […] You have to be able to run, walk, or at least use a wheelchair in order to use our app, but I want to be cognizant of people with vision and hearing disabilities. [I make] sure our fonts and colors are compliant and readable. [We’re trying to keep] as many people in the world in mind while designing.”

Redfern is going to keep making these advancements within Runkeeper, both for people with disabilities and for those just looking to pick up a hobby or get in shape. Even if her job isn’t what many people would consider as they log on to the app, User Experience is the backbone of any interface. Redfern will keep striving to help people gain confidence, balance, and a greater level of fitness through computer science, making the world a better place in the process.